By Katie R. on Apr. 12, 2013
“Momisms”, “Total Momsense” and “Phe-mom-enon” are just a few of the terms synonymous with stay-at-home mom turned YouTube and comedy sensation Anita Renfroe. Bringing a unique brand of estrogen-flavored musical comedy (with a little sass and edge to boot) Anita Renfroe tells it like it is! 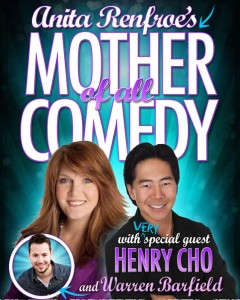 It all started when Renfroe debuted her own version of the famous William Tell Overture called “Momisms” with the encouragement of her own kids. In the video, Renfroe shoots off 2 minutes worth of stuff moms can be caught saying within a 24 hour period. From there came an overwhelming response from the parents of the world with over 10 million people viewing the YouTube video, opening a whole new world for Renfroe, and starting her career as a comedian for the mom masses. She has been featured all over the media, including Good Morning America, CNBC, Fox and Friends, Dr. Phil and more! On April 25, Anita Renfroe will bring her “Mother of all Comedy” tour to Fort Wayne with special guest Comedy Central comedian Henry Cho.  These two celebrated comedians have packed their bus full of zingers and hilarious stories, and they’re headed to the Summit City. When “Froe and Cho Bring the Show,” you can count on a no holds barred outlook on life’s hilarious, and sometimes downright unbelievably crazy, moments. You can catch Anita Renfroe and Henry Cho in the “Mother of all Comedy” tour April 25 at the Embassy Theatre at 7 p.m. Tickets are still available and range from $23 - $28. Learn more at Ticketmaster or Visit Fort Wayne. And - YOU CAN WIN TICKETS!!
Author