Mad Ants Basketball: Exciting For Sports Fan and Entire Family (and you can win tickets!)

By John F. on Feb. 16, 2013
As a huge basketball fan, I was excited when it announced in 2007 that Fort Wayne would be the home of a NBDL team. I attended several Fort Wayne Fury games back in the early 90’s, but after a little research, I learned the quality of basketball was expected to be much better in this new league. It was announced that a few highly-regarded college players could eventually suit up for the Ants, including many college stars from the state of Indiana (IU, Notre Dame, Purdue and IPFW). After receiving the name “Fort Wayne Mad Ants” in recognition of General Anthony Wayne (George Washington’s buddy) and looking over the team’s roster, I jumped on board the Mad Ants bandwagon. And I haven’t left since. Having been to the Memorial Coliseum on several occasions, I knew what to expect: Good food, reasonable beer prices and a clean venue. What I didn’t expect was a competitive team on the floor, and tons of entertainment. 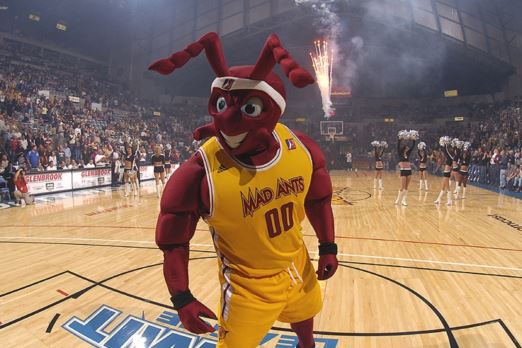 During most timeouts and in-between quarters, there are many different promotions, some two at a time, like t-shirts being thrown in the stands, trivia questions, races, etc. The announcer is loud and he gets you fired up. The Mad Ants mascot, properly named “The Mad Ant” is always jumping around and getting the crowd on their feet. He takes tons of pictures with kids, who then enjoy playing with his antlers. The product on the court is one a serious basketball fan would appreciate. These players are not Michael Jordan or LeBron James, but they are solid professional basketball players, who are working their tails off to win. Eventually, these players hope to reach the NBA, which is the ultimate goal. It was neat seeing firsthand many former players that I knew from college, competing right here in Fort Wayne. Following the game, I was happy to see the players interacting with the fans. Players took pictures and signed autographs, even had long conversations with people they probably didn’t know. The Mad Ants players and organization do an outstanding job interfacing with the local community. I thought that was a huge and unforeseen plus during my Mad Ants experience. If you have wanted to attend a Mad Ants game or were unsure what to expect, I can tell you that you and your family or friends will walk away very happy with the total experience. I plan to return to many Mad Ants games in the near future! And, you can WIN TICKETS to see the Mad Ants in action! Simply click here to register to win!
Author

John graduated from Indiana University in 2008, with a degree in sports communication and minor degree in telecommunications. While in Bloomington, he interned at Peegs.com/Inside Indiana magazine, writing as a basketball recruiting columnist. He graduated from Bishop Luers High School in 2004. Outside of the office, John likes to exercise, hit the golf course, play the drums and spend time with family and friends. A sports enthusiast, he is a diehard Indiana Hoosiers basketball fan.