Disney Junior Live! Is Coming to Fort Wayne - And You Can WIN Tickets! 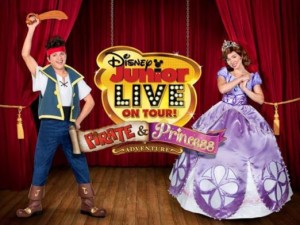 Admit it, growing up you had dreams of donning a crown and becoming a princess in a poofy dress or sailing the seven seas on a pirate ship searching for gold. You may even have little ones running around your house playing endless games where they are swashbuckling pirates or powerful princess's - and maybe even both!  If you do, you are in luck! Disney Junior is bringing their production of Disney Junior Live! Pirate and Princess Adventure to the Allen County Memorial Coliseum on October 25th. Pirates and Princesses Adventure combines the stories of Disney Junior princess Sofia, from Sofia the First, and high seas hero Jake, from Jake and the Neverland Pirates. The show opens as Sofia and her family make preparations for the kingdoms Friendship Festival where  Princess Sofia learns the true meaning of being a princess. There may even be an appearance by one of the original Disney Princess', Cinderella! Over in Never Land, Jake and his friends, Cubby and Izzy, as well as a special appearance by Peter Pan and Tinkerbell, take on Captain Hook to find hidden treasure in a volcano. Here Jake finds out what it really means to be a hero as he and his friends make their heroic quest. Fans of Sofia and Jake will be in for a special treat as their favorite Disney Junior characters come to life! As an added bonus, Disney Junior Live is bringing along their newest star, Doc McStuffins. Doc McStuffins is a six year old little girl who talks to stuffed animals and toys, and heals them when they are hurt or sick. The loveable little doc will be on hand to let the little ones in the audience help take care of one of her favorite toys with lots of love and magic! Disney Junior Live on Tour! Pirate and Princess Adventure will be at the Allen County War Memorial Coliseum on October 25th. To accommodate all of the little pirates and princesses wanting to come and see all of the Disney magic, there will be two shows with the first at 3pm and the second at 6pm. Tickets range from $15.50 to $48.50 and can be purchased at the Coliseum Ticket Office or online at Ticketmaster. You can find more information at Visit Fort Wayne or on the Disney Junior Live website. YOU CAN WIN TICKETS TOO! Simply visit the Disney Junior Live! Pirate and Princess Adventure contest page on Visit Fort Wayne, and enter for your chance to win 4 tickets to the show, a hotel stay, a family-four pack of tickets to Science Central, and a family-four pack of tickets to the Botanical Conservatory. You can enter to win until we draw a winner on October 16th!
Author